Dr. Brian Lokai has been affiliated with Suburban Veterinary Clinic since 1975, first as a client, and then by joining the kennel staff at age sixteen. After all these years he still enjoys working here with the animals.  Dr. Lokai graduated from the University of Dayton in 1989 and then graduated from the Ohio State University College of Veterinary Medicine in 1993.  Dr. Lokai enjoys hiking, reading, outdoor activities and spending time with his family.

After 45 years in veterinary medicine, Dr. Brown has announced that he will be retiring at the end of December 2021. We will miss Dr. Brown, and will not forget the contributions he has made over the last 17 years at our practice.  Due to his retirement, Dr. Brown is no longer accepting new clients or patients. We wish Dr. Brown all the best in his well-deserved retirement.

Dr. Mark Koesters was born and raised in Centerville, Ohio and attended Alter High School and the University of Dayton. He graduated from The Ohio State University College of Veterinary Medicine and joined Suburban Veterinary Clinic in 2006. In his spare time he enjoys spending time with his family and friends and being outdoors. 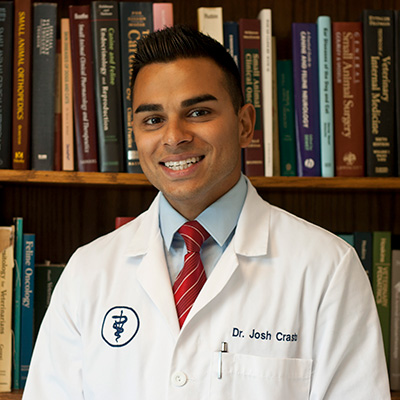 Dr. Josh Crasto was raised in Centerville, Ohio and graduated from Centerville High School in 2002. He graduated from the University of Dayton with a degree in Biology in 2007. After that, Josh moved to Columbus to pursue his veterinary degree, graduating from The Ohio State University of Veterinary Medicine in 2012. Josh joined Suburban Veterinary Clinic in 2013. He and his wife, Kim, who has been teaching at Magsig Middle School in Centerville since 2006, love spending time raising their two children, Sloane and Xander, and their dog Reagan. Josh enjoys working out, spending time with family and friends, and rooting for the Reds, Bengals and Buckeyes.

Dr. Mary Ormsby was raised in Centerville, Ohio. She received an undergraduate degree in biology at Cedarville University then attended The Ohio State University School of Veterinary Medicine. After graduation she worked as an emergency veterinarian in Cincinnati and also volunteered at the Warren County Humane Association. Mary joined the team at Suburban in 2018. She and her husband, Daniel, have a horse named Classy, three cats, Tommy, Jerry and Larry, and enjoy horseback riding, hiking, reading and being involved with their church.

Dr. Jennifer Pue-Gilchrist was raised in Canada, lived in North Carolina for 11 years, then moved to the great state of Ohio to attend veterinary school, and decided to stay after meeting her husband! She graduated from Guilford College in 2003 with a B.S. in Biology and Health Sciences. Since graduating from The Ohio State College of Veterinary Medicine in 2007, she has worked in private practice in the Dayton area, and joined the Suburban team in 2021. She enjoys making a positive impact on her clients and patients everyday. Dr. Pue-Gilchrist enjoys spending time with her family, playing volleyball, cheering for the Buckeyes, hiking, and reading.

Dr. Kristina Holtz was raised in Centerville, Ohio and graduation from Archbishop Alter High School. She attended Ohio University where she received her undergraduate degree in biological sciences. After graduating from The Ohio State University College of Veterinary Medicine in 2008, she returned to the Dayton area working at private practices in Beavercreek and Springboro. Tina joined the team at Suburban Veterinary Clinic in 2021. She currently resides in Centerville with her husband and three children. In her spare time she enjoys reading, exercising, and spending time with family and friends.